June 21, 2021
The SSPMA Board of Directors announced that Mason Servant from Roscoe, IL has been selected as the first SSPMA Scholarship recipient.  Mason will receive a scholarship of $2,500.  He will be attending Michigan Technological University in the fall where he is working toward a degree in Cybersecurity with a concentration in System and Network Security.
More information on the 2022 scholarship application process is available by clicking here.
April 30, 2021
The Sump and Sewage Pump Manufacturers Association (SSPMA) has announced the creation of an SSPMA Scholarship Program that will be open to applicants starting May 1, 2021.  The program will award up to two scholarship for $2500 each to students working toward an associate’s, bachelor’s, master’s degree or appropriate certification/trade associated with wastewater management.  Applicants may apply online at www.sspma.org/scholarship
​
March 17, 2021
The 2021 SSPMA Spring Meeting was held virtually on March 16, 2021.  Members elected a new slate of Officers and Board members to serve through 2023.  The complete slate, as approved by the membership, included:
Officers:
President:  William Gell, Xylem
Vice President:  Mark Huntebrinker, Zoeller Company
Secretary-Treasurer: Kent Ralston, Superior Pumps
Past President: Jeff Goodenbery, Liberty Pumps) 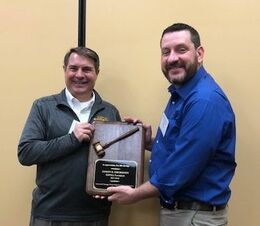 February 22, 2019
SSPMA Elects New Board and Officers
Indianapolis, IN - The members of the Sump and Sewage Pump Manufactures Association (SSPMA) elected a new slate of officers and directors at their 2019 Spring Meeting held on February 22nd in Indianapolis. The Board will serve from 2019 - 2021.  (Right) Deron Oberkorn was presented with an appreciation plaque for his service as Board President from 2017-2019. 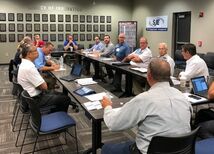 August 10, 2015
WWETT Creates 5 Session SSPMA Education Track for 2016 Show
The WWETT planning staff recently announced that there will be a 5 session SSPMA Education Track incorporated into their 2016 Show in Indianapolis.  The SSPMA educational sessions will be presented throughout the day on February 17, 2016 culminating with a general Q&A with presenters.  SSPMA is pleased to work closely with the Water and Wastewater Equipment Treatment and Transport  (WWETT) show to further the educational goals of the association.  A draft of the session topics, summaries, and bios may be accessed by clicking here.

Additional Information/ Special Room Rate
Our reception and meetings will be held at the Inn of Chicago, 162 East Ohio Street, in downtown Chicago. SSPMA has secured a block of 10 rooms at a rate of $159 per night.  Members may reserve a room by calling 312-787-3100 and referencing the SSPMA Fall Meeting in order to secure the discounted rate.  Complete registration information will be sent out prior to the event. Stay tuned!

Jan. 18, 2015
Registration is now open for the 2015 SSPMA Spring Meeting!
INDIANAPOLIS, IN — The SSPMA Spring Meeting will be held in Indianapolis, IN on Wednesday February 25th with an all new member networking reception on Wednesday Feb. 25th and meetings on the morning of Thursday Feb. 26, 2015. Please mark your calendars and plan to attend!
Our meetings will be held at the Marriott Indianapolis Downtown, 350 West Maryland Street, which is also one of the designated special rate hotels for the WWETT Exhibition. No special SSPMA room rates are available.
The agenda and reservation forms can be downloaded, as a .pdf (Adobe Acrobat) file: SSPMA's 2015 Spring Meeting

Nov. 18, 2014
SSPMA Will Present Three-Track Educational Sessions at WWETT
INDIANAPOLIS, IN — The Sump and Sewage Pump Manufactures Association (SSPMA) has been selected to provide a three track educational session at the Water & Wastewater Equipment, Treatment & Transport (WWETT) Show on February 23, 2015.

Three sessions will be presented by SSPMA members focusing on various aspects of pump installation and maintenance including:
1) "Sizing Guidelines for New or Replacement Sewage Pumps", presented by Deron Oberkorn who is the Corporate Product Development Manager for the Zoeller Company.
2) "Backup Battery and Combination Pump Systems Evaluation and Installation", presented by Alan Schulman who is the founder and CEO of Glentronics, Inc. and
3) "Specifying Pumps / Why Do Pumps Fail?" presented by Jeff Hawks, President of Champion Pump Company, Inc.

July 30, 2014
SSPMA Members... Register Now for SSPMA's Fall Meeting in New Orleans!
INDIANAPOLIS, IN — Please register and join us on September 30/October 1, 2014 in New Orleans for the 2014 SSPMA Fall Meeting!
The Member dinner will be held at 5:30 pm at the Red Fish Grill on Tuesday September 30th followed by the Member meetings on Wednesday October 1st at the Astor Crowne Plaza.

The Marketing and Technical Committees will be meeting from 8:00 – 9:30 am (Local Time) and the General Member meeting will be held from 11:00 – 12:30 pm. Our guest speaker will be Matt Winkelman, PE, Sr. Civil Engineer, GHD. Mr. Winkelman will be speaking on his white paper covering lessons learned from construction of a new pump station on an existing pump station including layout and basic hydraulics of the station.

HOTEL ROOM RESERVATIONS:
Given our group’s size and other conventions in town, SSPMA was unable to reserve a room block at the Astor Crowne Plaza at 739 Canal Street in New Orleans. Attendees may call them directly at 504-962-0500. Participants in the WEFTEC Show should call their services (before August 29th) at 888.301.4933 or online at Water Environment Federation Hotels

13 Jan 13, 2014
SSPMA's Spring Meeting will be held in Indianapolis
INDIANAPOLIS, IN — Our meetings will be held, once again, at the Indianapolis Marriott Downtown which is connected to the Convention Center and one of the designated hotels for the Pumper & Cleaner Expo. The meeting will feature presentations by some of SSPMA's Associate Members in addition to the board of directors and general membership meetings

Oct. 1, 2011
Metropolitan Industries Hosts SSPMA’s Fall Meeting
SSPMA held its Fall Meeting in late September at Metropolitan Industries in Romeoville IL. The SSPMA member company provided an overview of their various products and projects, involving pumps, controls, and ancillary equipment, covering the municipal, commercial, HVAC, industrial and residential water and wastewater industries. A tour of their “green” energy and water independent facility in a nearby housing on their campus was included.

Nearly all pump company members were represented, as well as most component member companies. Featured at the General Meeting was the unveiling of two major new projects: (1) a new training program for sizing sewage pumps, including a working calculation example which can be downloaded for use with the program and (2) an upgraded, newly designed SSPMA website. The training program was developed for members of the plumbing industry who work with sewage pumps.

SSPMA President Susan O’Grady (Pentair Water) noted “both projects were handled and overseen by members, with the first now 95% complete and the second 90% complete.”


Jan. 11, 2011
Effluent Pump Training Video for Wastewater Treatment Systems
NORTHBROOK, IL — A training video, "Effluent Pumps for Onsite Wastewater Treatment: Selecting the Right Pump for the Job", is available from the Sump and Sewage Pump Manufacturers Association (SSPMA). The educational video is intended for onsite contractors, engineers, government regulators, research academics and trainers in developing ways to make it easier to successfully match the equipment to the job.

The 28-minute video, along with accompanying work materials, deals with the sizing and selection of an effluent pump for a particular application. Specifically, the presentation takes the viewer through the selection process for two of the more common systems — enhanced flow septic tank pumping and low-pressure pipe distribution. However, the principles governing pipe size, pump selection and control settings can be applied to other applications as well.

To order a copy, along with one set of the worksheet materials, which can be duplicated for classroom use, send check or money order (sorry, we don't accept credit cards) for $45, U. S. funds to SSPMA, P. O. Box 46244, Indianapolis, IN 46244. Discounts apply for quantities of two or more.